Just over a month ago i got very lucky to apparantly become one of the first owners of a Samsung SSD 960 Pro M.2. Order queues are delaying this thing for about 3 months, quite the same distribution mess we experienced with the 950 Pro a year ago. Anyway, be assure that the wait is absolutely worth it. Coming from a already not-so-shabby SM951 the 960 really kills it, but watch for yourselves…

As soon as Samsung finally made the SM951-NVMe SSD publicly available (they paper launched it 6 months before), i got the 512GB model (MZVPV512HDGL) via some “back channel” sale to build my new photography and gaming rig. Since it’s a OEM product the vendor does not sell it to consumers nor offers any drivers or product support. Typically this is not an issue for a SSD but in this particular case some M.2 PCIe tweaking via EFI settings was required and the default Windows 10 NVMe driver provided dismal sequential throughput of 80 MB/s while the drive can do about 2400 MB/s, depending on block size and queue depth. Guess thats what you call a early-adopters tradeoff. As a temporary workaround, NVMe drivers for Intel datacenter SSDs could be used to replace Windows’ default driver.

Today i noticed that Samsung has released a proprietary driver along with the SSD 950 Pro product launch. The 950 Pro is basically the same SSD just with stylish PCB coloring and “3D V-NAND” technology (Samsungs lingo for TLC) rather than MLC like the SM951 uses. While TLC is a more recent technology and offers better density (aka. cheaper to manufacture huge chips), it’s not as quick when writing data and should be a litte less reliable than MLC. The SM951 may be older but could still be a superior SSD technology-wise. It turns out that this driver is also compatible to the SM951 SSD and provides comparable throughput to Intels driver. 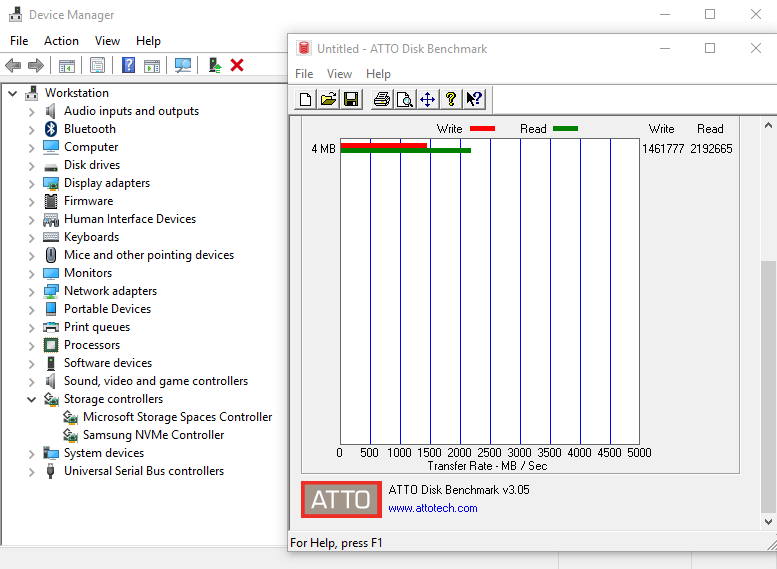 Samsungs driver can be downloaded here. Note however that Samsung Magician will still not fully support this drive since it appears to check for its identifier and offers limited capabilities for Samsung OEM and non-Samsung drives.