At the end of 2016 i upgraded from a Late 2012 MacBook Pro (Retina) to a Late 2016 MacBook Pro with Touchbar. Again the 13” model with the fastest i5, 512GB SSD and 16GB of RAM. After having used it every day for one month, i think it makes sense to step back and review the changes which came with the redesign.

To start with the bad news, TouchBar turned out to be as useless to me as anticipated, i rarely work with my laptop while not connecting external screens and peripherals to it. For mobile usage the absence of the Esc-key confirmed to be horrific. Even after weeks i’m having lots of mistypes simply due to the extreme sensitivity of the TouchBar whereas a regular key would not activate by just resting my hand on or even close to it. I reconfigured the TouchBar in a way that at least no critical functions are anywhere next to the upper left area, turning off the display by accident has been a major pain. The other thing which did drive me crazy was the ever-changing context when doing heavy multitasking. Changing from Terminal to Photoshop to Safari constantly changes icons, adds previews and overloads my peripheral area of view with junk. On top of all this the TouchBar sometimes does not get back from sleep or just gets blank out of the blue. This one one of the most non-Apple-like features i ever experienced.

That being said, it’s a cool showcase (scrobbling on YouTube, Emojis…) but i did not found myself really using it at any application during regular work. Perhaps it’s unusual for a “Pro” notebook to assume that its users are familiar with shortcuts, even with native apps like Mail i did not experience any real benefit. From a functionality point of view i agree that F1-F12 are not really used on a laptop but re-mapping would’ve been possible without a full-width touch screen. A small TouchBar at the right side with just 3 configurable actions like “lock”, “sleep” and play/pause would have been more than sufficient. All this context-aware non-sense falls apart and highlights its uselessness when getting down to “real” typing work. Obviously it can’t even come close to replace shortcuts and the speed of typing. The experience feels like being made for a device that gets controlled with a thumb rather than 10 fingers and software at the complexity of “Stocks” rather than an IDE. Tapping “and” for autocomplete after typing “an”? Come on!

TouchID was the real reason why i opted for a model with TouchBar, and it delivered. Unlocking the machine and using specific apps for banking and credentials storage is so much easier than typing the same password all the time. It also helps a lot to overcome the reluctance of locking the machine at work. The sensor operates perfectly and much better than any other laptop with fingerprint recognition i know of. Since Germany is still a developing country in terms of online payments, i could not use Apple Pay yet but can imagine how nice it would work. Some software integration should be improved though, for example confirming installations, system changes to bring down the need to enter passwords even more or just fixing odd behaviour like asking for a fingerprint if the laptop is closed.

Summing up, i think Apple seriously misstepped with the concept of a touch-sensitive display next to the keyboard. It’s cool to show and some niche software may have its benefits but overall its a pain during normal use and just feels not ready. I’d pay the same premium to have a ordinary Esc and Function-Keys bar with just a short TouchBar and TouchID next to it.

Coming from the old scissor-type MacBook Pro keyboard, the new keyboard feels a bit odd in the beginning, but i rapidly started to like it a lot. The sound is still a bit too “clicky” for my feeling but the actuation can be felt much better and my mobile typing speed got up significantly. For stationary use i connect a external mechanical keyboard (e.g. Topre Realforce, Filco), which of course is another league, but the current iteration is the best built-in laptop keyboard i experienced so far.

The Trackpad continues to be great and got even bigger and better. As with the keyboard i disliked the short/none travel at first but got used to it quickly. Getting back to the old Trackpad made it feel quite clunky, small and laggy - even though it was already stellar to any other laptops trackpad. The added size and palm-detection works great, no complains here.

Not much to complain here as well. Adding a NVMe SSD did add a significant speed boost compared to the old SATA/AHCI models. The dual-core 2.9GHz CPU with SMT (hyper-threading) is more than fast enough for software development, business tasks and even runs games like Diablo 3 or StarCraft 2 smoothly on 1080p+ screens with medium quality settings. Something which the 2012 model was struggling with. While my workstation/gaming machine and home server sport 32GB of DDR4 RAM, 16GB of DDR3 as maximum configuration seems low but honestly there are few workloads that require more memory on the given power budget.

So far i can tell for sure that the battery does not last as long as the 2012 model. Usually i notice a bump in runtime when moving from a 1200+ cycle battery to a brand new one, not so with the 2016 model. The “upside” of this is that the lower rated battery is fully charged much quicker. While 4-6h of “real world” runtime for my workloads is not a issue, i would have happily traded 5mm more thickness for a bigger power budget.

The enclosure continues to raise the bar for laptops, it feels very durable, sturdy and high-end. The new darker color looks very good as well. Due to the reduced size the laptop feels even more “compact” and has a nice weight/size/thickness ratio. Again, i would sign up for bit less “thin and light” and more “powerful and pro” immediately. I hope this design is “light enough” for some years and battery development, component efficiency gains solve the rest.

The screen remains great and i can’t spot any weaknesses. Audio did significantly improve in terms of a more “neutral” sound, less trash-can influenced. Even though the “speaker grids” are cosmetic, it’s more than loud enough.

My old MacBook Pro got quite heavily used and saw some drops so it was not a surprise that the BT module was broken at some point. Getting to the new model solved that and connections are stable. WiFi was bumped to 802.11ac which works flawless again as well. Connections are established much faster than before.

Well, this certainly is the most critically discussed “flaw or feature” of the new MacBook Pro. I assumed that it would be a major issue for me but i was wrong. Of course you’d need a whole bunch of new adapters and the USB-C space is crowded with incompatible products. On top, the confusion of concepts for “port” and “protocol” makes it really hard to chose the right dongle. Compared with the older model, i lost USB-A, Mini-DisplayPort, Thunderbolt 2, SD and MagSafe but 4 USB-C Ports with Thunderbolt 3 easily replace them.

I max out four ports with 2 DisplayPort adapters, a USB/HDMI/SD/Ethernet hub with USB-C charging and still got one port for a fourth display, storage or another phalanx of ports using a second hub. For travel and legacy hardware i use a VGA/HDMI/USB/Ethernet hub. Lots of adapters but also a bunch of ports to use. In reality, those adapters stay at my desk, so they do not really become clutter when going mobile. Why Apple chose to drop the SD-Reader is beyond my understanding though. 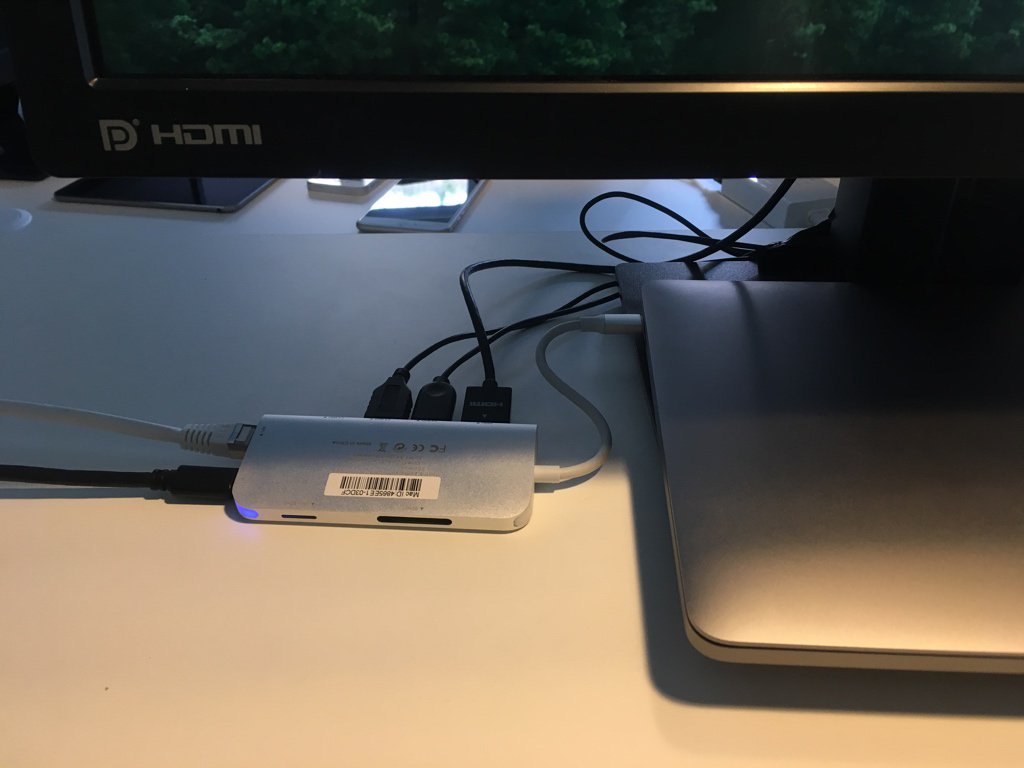 Before, i used 2x Mini-DP for displays and got stuck with two USB-A ports which had to be extended by an external hub to connect mouse, keyboard, storage and ethernet devices. Looking at it this way, four Thunderbolt 3 ports are offering much more options and the adapters are much more potent than before. That being said, compatibility is an issue and choosing the right adapters is trial&error.

Would sticking to the old ports and protocols have been easier? Definitelly! But this transition again feels like the right point in time where legacy connectors got dropped. Both ports and protocols are extremely versatile and offer much more bandwidth. It’s funny enough that the headphone-jack survived, i guess there are more DJs than Photographers in Cupertino…

Connectivity to the Apple ecosystem is a mess if you need cable connections. Mobile devices? Lightning, Headphones? Micro-USB, Notebooks? USB-C. If only they would use USB-C for mobile devices as well… perhaps thats coming sooner than expected. While i liked MagSafe, it always felt a bit “too proprietary” for me. Certainly, when working in a mostly-Mac company, i always found someone with a spare power supply. The new USB-C chargers however make it easier to charge from either side and use shorter cables as well as just replacing the cable if it breaks. I never understood why Apple seriously dongled a really bad cable to a €80 brick. Obviously they made a billion per year from people replacing their perfectly fine chargers, but this really is a shameful waste of resources. Now you’re expected to pay €80 for the charger, €25 for the extension cord and €25 for the charging cable, but at least there are options to replace a worn-off cable.

Overall i’m delighted with the new MacBook Pro, the only real downside is that you can’t get a model with TouchID, four USB-C ports, high-end spec but without a TouchBar. Such a “plain workhorse” configuration would certainly sell like hot-cakes to the serious “pro” consumer. Looking at the “thin and light” mania which led to lower battery specs which led to the choice of chipset which translates to the 16GB memory cap, i’m a bit troubled though if Apple is still targeting that class of users without compromises. Lets see what refreshed models with Kaby Lake will bring except a CPU bump.

A short list of third-party adapters that have proven to work well with this machine, just in case…